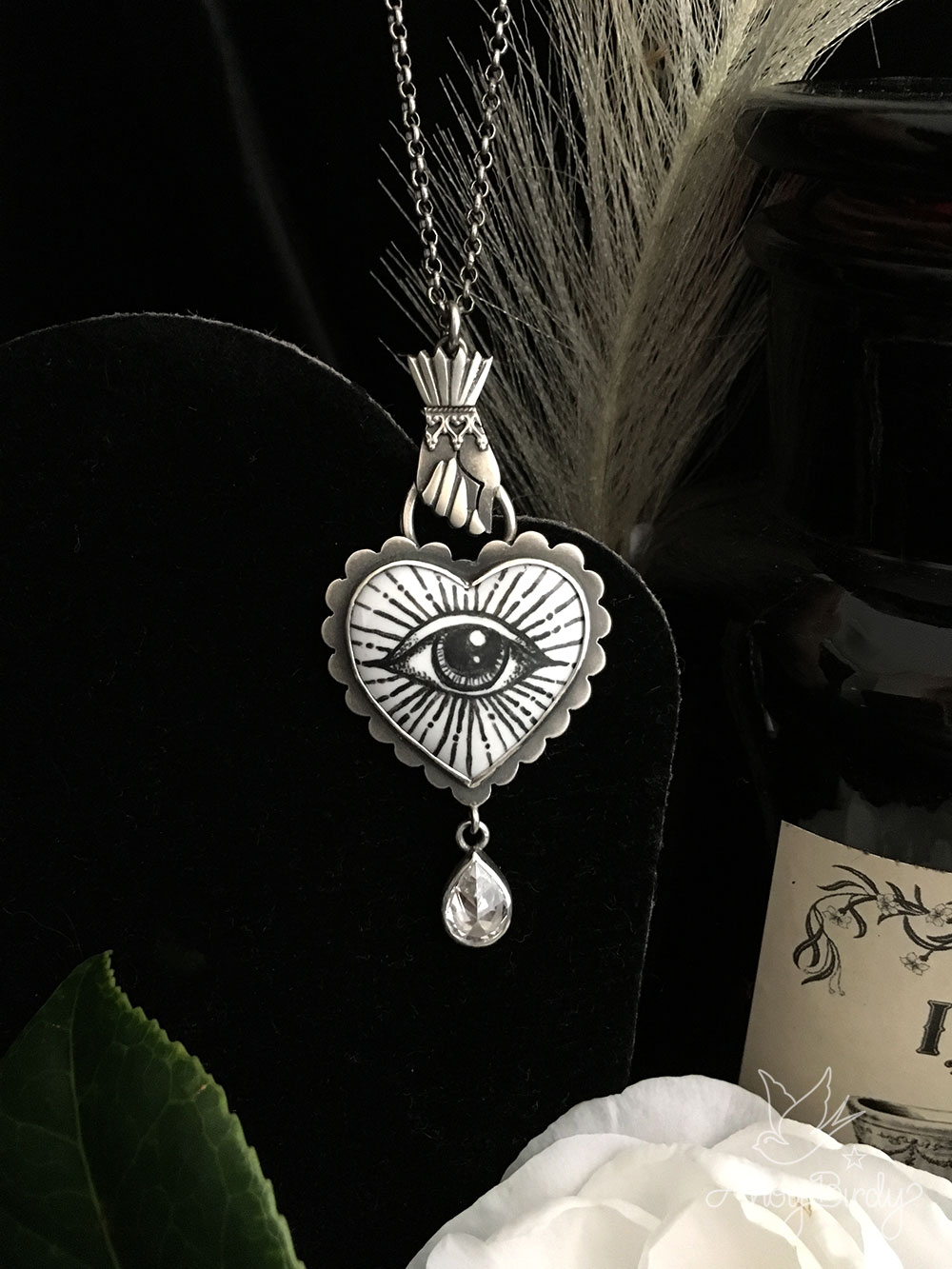 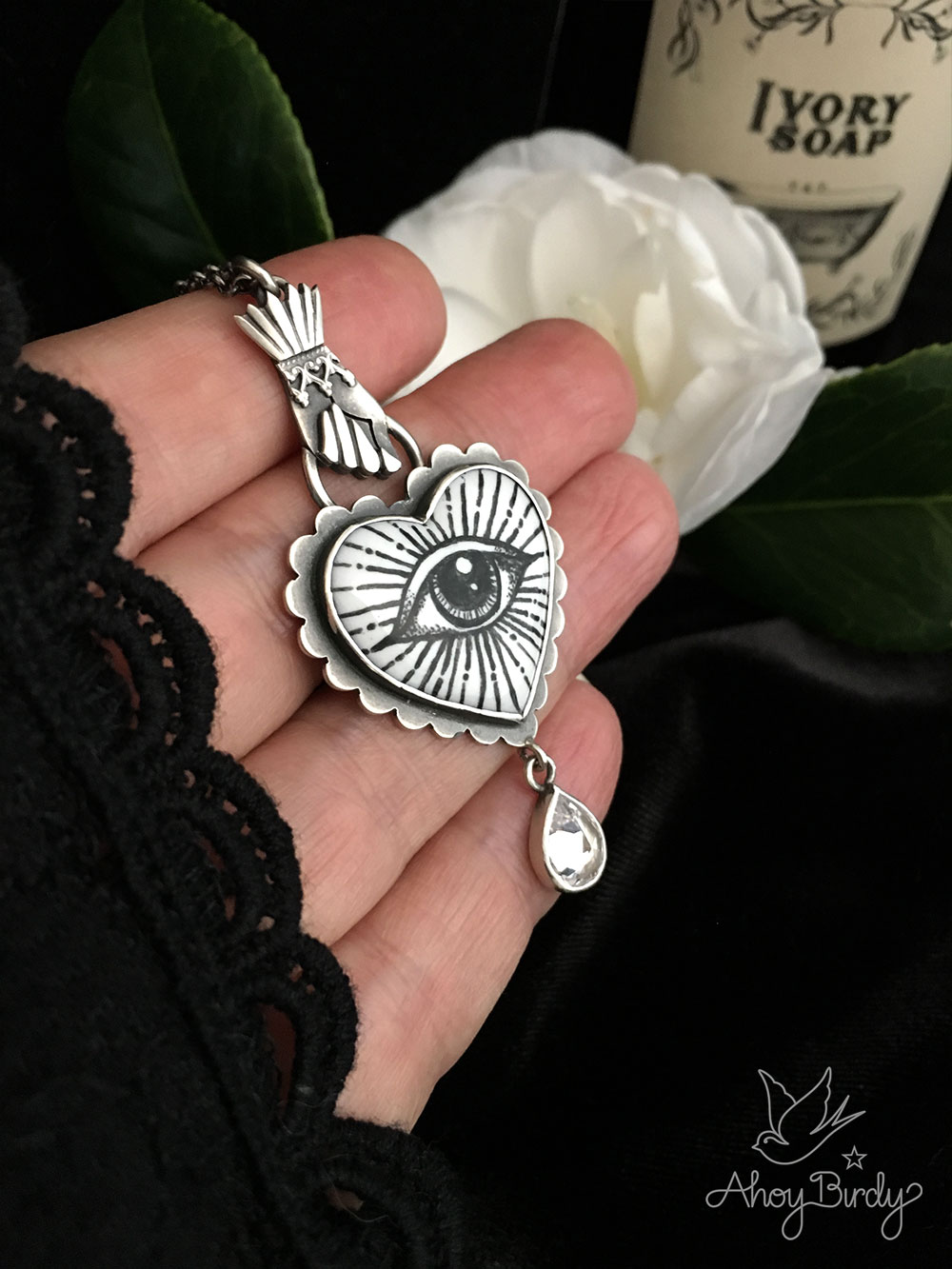 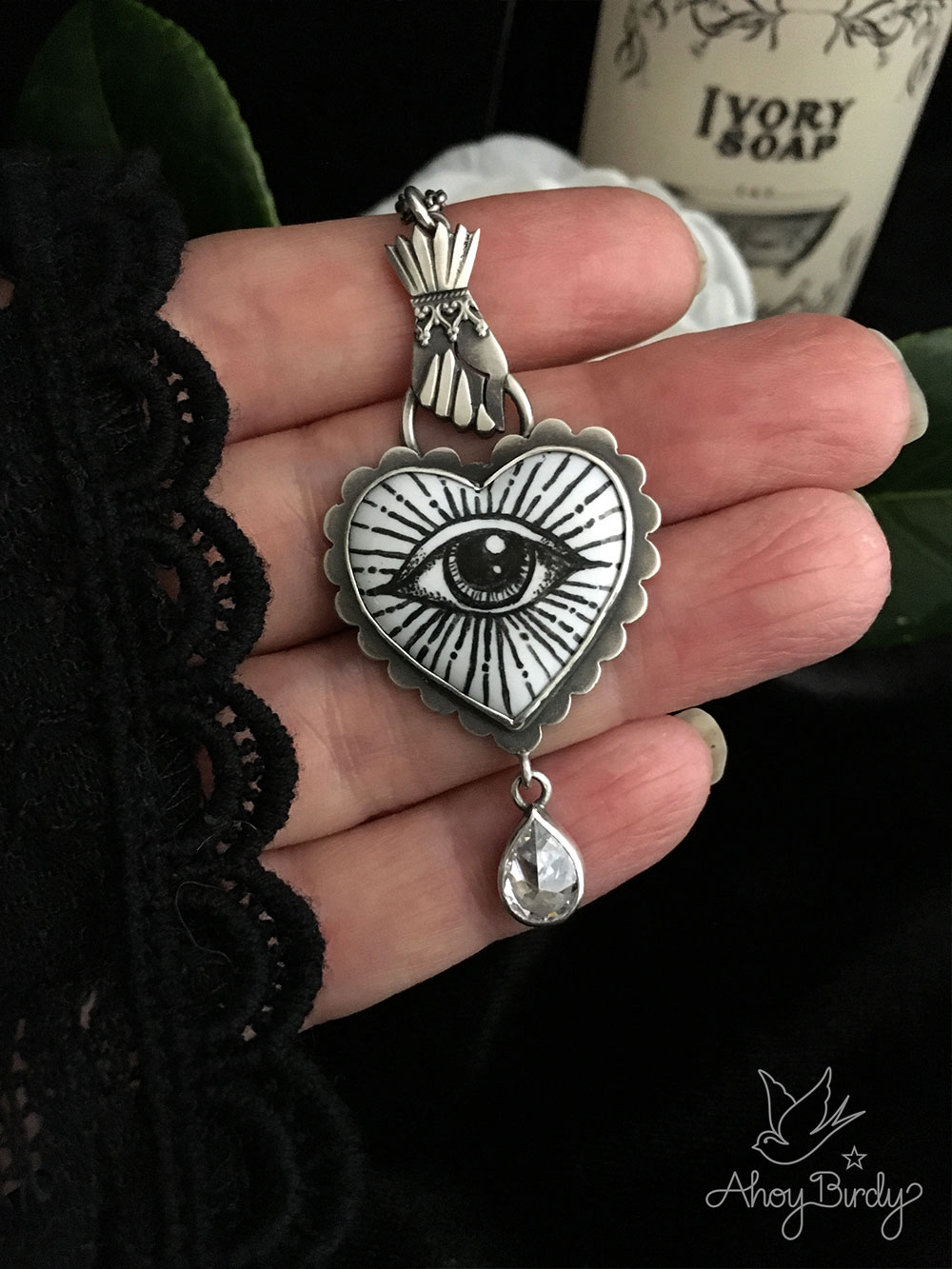 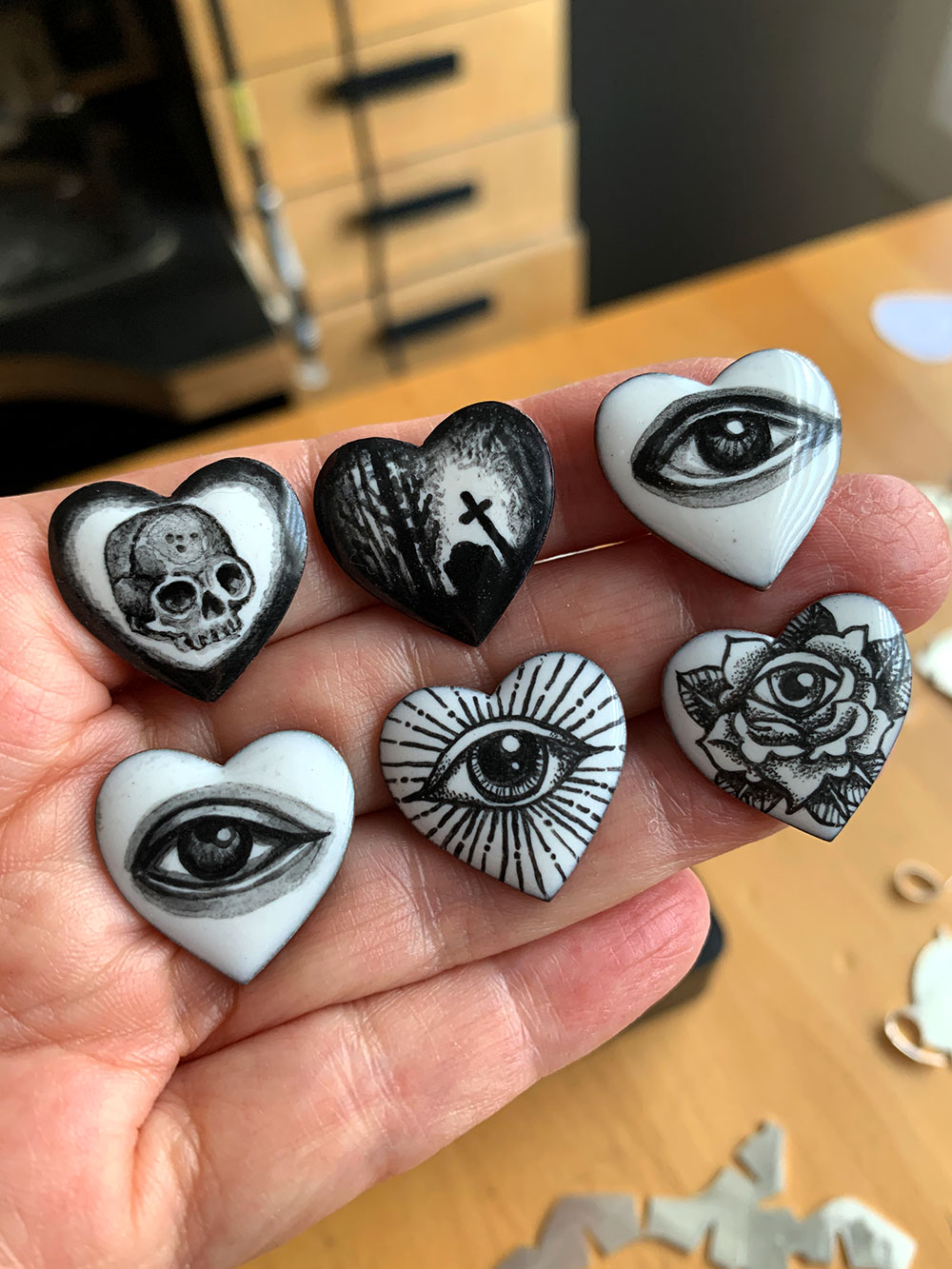 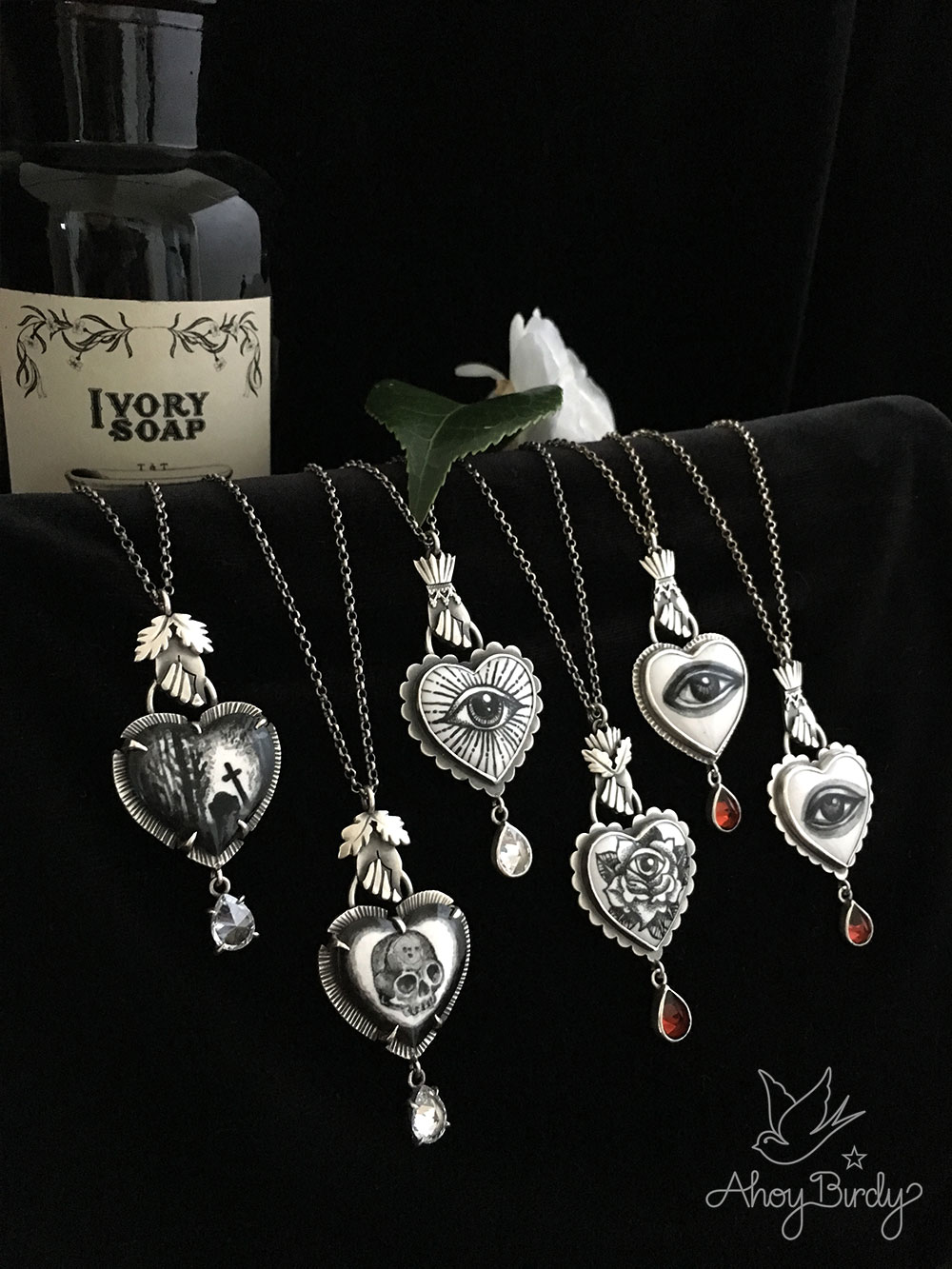 This is my modern twist on Victorian era jewelry, a tattoo style lovers eye.

Lovers’ eye paintings were a popular fad from c.1790 – 1820. The idea being that the eye would be recognisable only to the recipient and could therefore be worn publicly while keeping the lovers identity a secret.

At the time, British culture was infatuated with seeing and being seen. Because social codes limited public interaction between people of the opposite sex, looks could more easily be exchanged than words. Looking became both significant and codified, different types of glances conveyed different emotions and messages. Eye miniatures materialised in this environment where even the subtlest glance could convey lust, love, surveillance, or a heady mix of all three.

Victorians had quite an obsession with disembodied hands, they believed hands showed character, wealth, status and beauty.
Jewelry in this era went beyond ornamentation since the Victorians also loved symbolism. Often pieces aimed to evoke meaning and hands became central to conveying meaning for the wearer.
A hand clutching a flower symbolised friendship, earrings featuring hands pointing in one direction were a sign of protection, and hands clasped together became synonymous with betrothal and a symbol of fidelity and unity.

The hearts are cut from copper and have numerous layers of enamel glass that is kiln fired at 800 degrees celsius. The eye is hand painted and fired several times to give a glossy finish. The setting is made from sterling silver and comes with a 45cm /18″ sterling chain.

The pendant measures approx 55mm (2 1/4″) high from the top of the hand to the bottom of the gemstone x 28mm (1″) wide. Finished off with a crystal quartz gemstone.